Are Cannabis and Cocaine Use Among Young People Connected?

But it's not just cocaine that UK residents need to be concerned about. Cannabis is also a huge problem. Especially for young people, cannabis use may normalise drug use among this demographic, leading them to be more prone to experimenting with cocaine later on in life.

Cannabis Usage Rates Among Young People in the UK

It's unfair to say that using one drug "causes" someone to transition into using another drug. However, it is often true that people in the UK who use cocaine at the present can also attest to using cannabis in the past. Is it possible that such individuals would not have experimented with cocaine had they not already been experimenting with cannabis? It's worth looking into.

According to the Office for National Statistics, cannabis is the most frequently used drug in the United Kingdom. Among UK residents aged 16 to 59, 7.8% of experiments with cannabis. However, when just the young adult demographic is examined, rates of cannabis usage are much higher. Among UK residents aged 16 to 24, 18.7% uses cannabis. That means almost one in five UK young adults uses cannabis.

There is a similar trend playing out with cocaine use. Among UK residents between the ages of 16 and 59, only about 2.6% of people use cocaine. But when the age group being analysed is narrowed down to just young people aged 16 to 24, the rate of cocaine use soars to 8.7%. 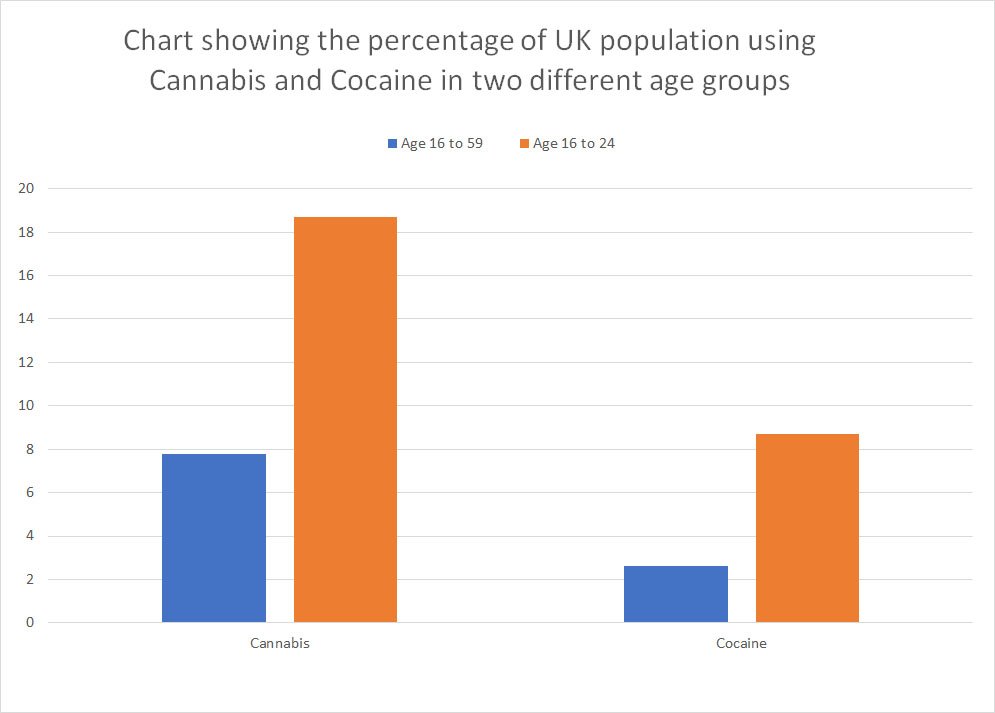 Here's a look at total numbers of use and a comparison of current rates of use to past rates of use: According to ONS research, about 1.2 million UK residents between the ages of 16 and 24 use cannabis. And that rate of use is growing. For example, cannabis use among 15 to 59-year-olds increased 1.5% over one year, but usage increased 5% among 16 to 24-year-olds in that same year.

Cocaine Addiction on the Rise; UK Hit Hardest with Rates of Cocaine Abuse Among Young People

Sadly, soaring cocaine use has also led to a spike in deaths related to cocaine. Quoting another Guardian piece, "Cocaine-related deaths have increased for the sixth year running, up to 432 deaths in England and Wales in 2017, compared with 112 in 2011."

There are many potential reasons why cocaine misuse and addiction have risen so much in the United Kingdom. Rising rates of cannabis use among young people is certainly one of the reasons, as many young cocaine users say they started using cannabis before going on to cocaine.

But there are other reasons why cocaine use is soaring. From Ian Hamilton, a senior lecturer in mental health at the University of York, "If you are a young person who is a bit anxious, lacking in confidence or not sure of your place in the grand scheme of things, coke sorts all that out for you.” Hamilton goes on to say, “If you can offer me a line now that makes me feel better, or the alternative is that I'm going to have to wait at least four weeks to see a counsellor, it's an absolute no-brainer. I'm not recommending it (cocaine use). But austerity has created a real bottleneck in people getting the support they need, and drugs are far more instant. They have no opening and closing hours."

As UK residents and families look to the future and search for answers to reducing cannabis and cocaine use among young people, it becomes more apparent than perhaps ever before that parents and educators must inform young people on the harms and dangers of using cannabis, cocaine, or any drug for that matter.

Drug Prevention and Education; Parents and Educators are the First Line of Defence in Protecting Youths

It's clear from the reports and from research done by UK crime and health organisations that both cannabis use and cocaine use are on the rise and that young people who experiment with cocaine almost always started using cannabis before switching to cocaine.

If there's a lesson to learn from those findings, it's that parents and educators must not be at all permissive about cannabis use among young people. Cannabis is harmful all on its own, but if it sets the stage for cocaine use later on in life, that makes it even more dangerous.

The good news is that parents and educators are positioned to prevent this from occurring despite upticks in cannabis and cocaine usage rates among UK youths. Studies show that when adolescents and young adults are educated about drugs, they are far less likely to experiment with such substances.

When parents talk to their kids about drugs, they have the opportunity to teach their children why they wouldn't want to use drugs. When educators host seminars about drugs, go over facts and data and invite discussions within their classrooms, students learn the facts about drugs, learn why they're harmful, and decide for themselves not to ever experiment with drugs.

Education about drugs, delivered from parents and educators to young people, is the key to preventing rising rates of cannabis use and cocaine use within that age group.